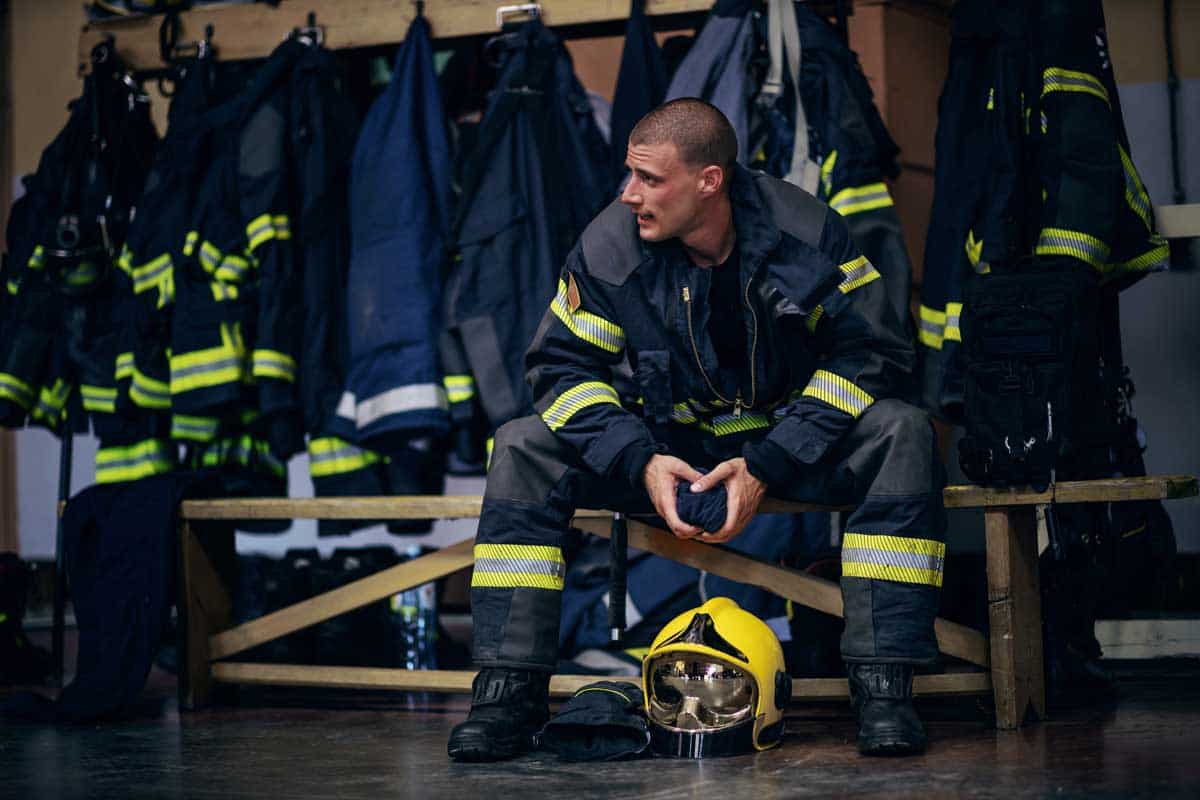 Firefighter Personal Protective Equipment (PPE) is called turnout or bunker gear. Bunker gear can include as little at the bulky trousers, boots and jacket or a combination of all the protection gear including three layers of a protective suit.

Bunker gear is a term that originated from the idea that firefighters sleep at the fire station with their gear next to their bunker. Sleeping with gear at the feet assures that a firefighter can jump into action at the sound of the alarm siren.

Turnout clothing must have three components – an outer shell, a moisture barrier and a thermal barrier. In between each of these layers are pockets of air that further insulate the firefighter.

Innerwear or “station wear” is commonly used to describe the uniform worn by firefighters at the station. This purpose of firefighter station wear is to protect the firefighter under NFPA 1975 scope of standards, but it is also a symbol of honor. Station wear generally consists of pants, a shirt and steel-toed boots. Firefigthers are required to look professional but the uniform varies with every local or state fire department.

Firefighter gear is required to be water and fire resistant. The outer layer is treated extensiviely with PFAS or constructed with fluoropolymers, a type of PFAS in order to pass this requirement. These uniforms break down over time and are not replaced for ten years.

PFAS stands for both Perfluoroalkyl Substances and Polyfluoroalkyl Substances. The chemical composition of PFAS includes a bond that is considered the strongest bond in nature – the bond between carbon atoms and fluorine atoms. As a result, they take a long time to break down and have been dubbed “forever chemicals”. They have been found to contaminate water, air, soil, and food supplies, and have even been found in breastmilk.

There are thousands of different chemicals that fall under the category of PFAS, though two of the most common and widely researched are PFOA (perfluorooctanoic acid) and PFOS (perfluorooctane sulfonic acid).

PFOA and PFOS have been discontinued in the United States but PFAS can still be found in many common products, including the aqueous film-forming foam (AFFF) used by firefighter.

Fire fighting fabrics that break down over time lead to these “forever chemicals” contacting the skin and shedding into the environment. According to the chemical physicist, Graham F. Peaslee, the layers of textiles found in turnout gear are highly fluorinated. Over time, the layers of these textiles rub against each other and the PFAS from the outer shell and the middle moisture barrier appears to migrate to the thermal layer, contacting the skin.

Different PFAS have been linked to a wide variety of health issues in humans, including certain types of cancer. Studies show that firefighter suffer from disproportionality high rates of cancer, including types that have been linked to PFAS exposure such as testicular cancer, prostate cancer, mesothelioma and non-Hodgins lymphoma. Firefighter gear cancer lawsuits are currently being filed on behalf of firefighters who believe their diagnosis may be a result of this breakdown of materials.

TruLaw and its seasoned lawyers are working hard to support and stand up for those who have been injured due to third-party negligence. Visit our Firefighter Gear Instant Case Evaluator to learn if you may be eligible to file a PFAS Firefighter gear lawsuit today.