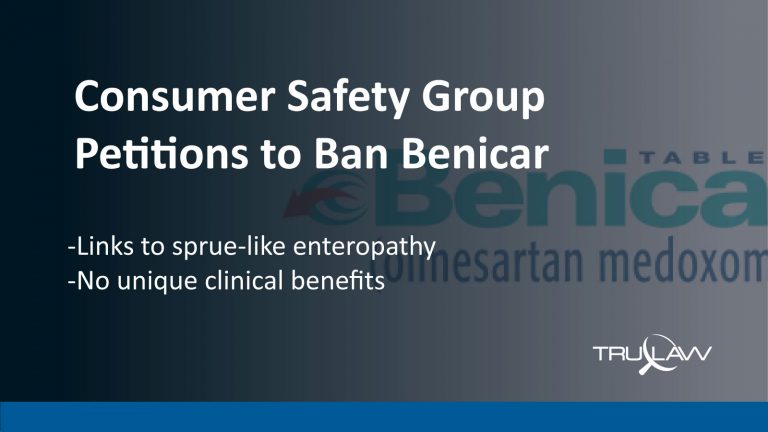 On November 15th, 2017, Public Citizen, a consumer advocacy group with more than 400,000 members filed a Benicar ban petition demanding that the FDA remove popular high blood pressure drugs Azor, Benicar, Benicar HCT and Trebenzor from the market because of their association with a severe gastrointestinal injury, sprue-like enteropathy.

Benicar, Azor, Benicar HCT and Tribenzor are widely prescribed angiotensin II receptor blocker (ARB) high blood pressure drugs containing olmesartan medoxomil.   These four drugs have made Daiichi Sankyo, the manufacturer of all three just under $1 billion dollars annually for the past few years (2014 and 2015).  Yet, the company has been aware of the link to this dangerous GI injury for years.

In the petition filed on November 15th, Public Citizen further noted that these olmesartan containing drugs manufactured by Daiichi Sankyo, Inc. offer no unique clinical benefits as compared to other ARBs so there should be no reason to remain on the market.

Sprue-like enteropathy causes serious morbidity.  Individuals diagnosed with this disease experienced severe weight loss and malnutrition.  Most required hospitalization, with some needing intensive care.  Severe serum electrolyte abnormalities and acute kidney injury were among the complications of the enteropathy experienced by patients.   Studies were able to pin-point the cause of the sprue-like enteropathy as coming from one of these drugs because the symptoms mostly disappeared after discontinuation of the medication and returned when patients started taking the medicine again.

The first olmesartan medoxomil drug was FDA approved in 2002 and within ten years, studies clearly pointed to a link between these drugs and sprue like enteropathy.  Lawsuits filed on behalf of individuals suffering from sprue-like enteropathy allege that Daiichi Sankyo knew about this link and should have warned the public prior to 2012 when case reports were published in scientific medical journals.

The FDA warned of the link between Benicar and enteropathy in 2013 based on the review of 23 individuals reported to the FDA through the FAERS database.  At that time, the FDA required that Daiichi Sankyo change their label to warn the public of the risk of sprue-like enteropathy.  Public Citizen called this label change “weak” and “seriously deficient from a public health perspective.”

In August 2017, Daiiichi Sankyo agreed to pay up to $300 million in a Benicar lawsuit settlement intended compensate approximately 2,300 individuals who suffer from the life-altering disease sprue-like enteropathy.

The FDA will consider the petition and respond to Public Citizen.