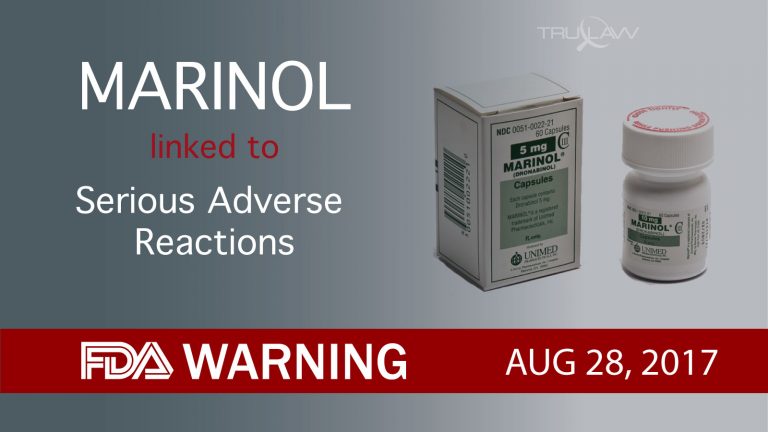 The U.S. Food and Drug Administration (FDA) approved Marinol (dronabinol) on May 31, 1985, for the treatment of anorexia nervosa associated with weight loss in patients with AIDS, and chemotherapy-induced nausea and vomiting (CINV).

Marinol is manufactured by Unimed Pharmaceuticals, a subsidiary of Solvay Pharmaceuticals, and is usually prescribed when other drugs used to control nausea and vomiting have been unsuccessful. Dronabinol (also known as THC) is a man-made form of the active natural substance present in marijuana.

On August 28, the FDA approved labeling changes for Marinol. The label was updated to include the following new risks to the Warnings and Precautions section:

The Warnings and Precautions section of the label was completely reorganized, and five new subsections were added:

New risks were also added to the Adverse Reactions – Postmarketing Experience section, including:

Despite the label changes, TruLaw is still monitoring Marinol for some serious adverse events that have been reported to the FDA but are not currently listed in the drug’s current prescribing information, including myocardial infarction (seven cases), pancreatitis (four cases), oesophageal carcinoma (two cases), haemorrhagic stroke (two cases), and lung infection (two cases).